If you are over in the good old US of A and have been after picking up the Nokia Lumia 900, but don’t wish to have to shell out too much cash for the Windows Phone handset, you might like to know that you can now purchase the Nokia Lumia 900 for just a single cent once again.

According to the guys over at GSM Arena, Amazon US for the second time is offering the Nokia Lumia 900 smartphone for sale at just $0.01 although you will be required to sign your life away for the usual two-year period with AT&T, but if you don’t mind that, a cent isn’t a price to be snuffed at.

The one cent deal Amazon deal is good for the black, white and cyan versions of the Nokia Lumia 900, whilst the off contract price for the Windows Phone from Amazon is $499.99, and as stated earlier this isn’t the first time Amazon US has offered the Lumia 900 for a cent, but this time round the deal isn’t limited to just new customers. 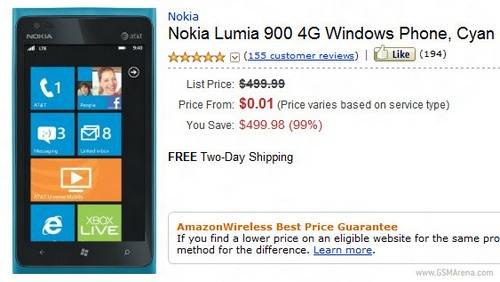