We’ve been bringing Phones Review readers news on the Google Nexus 7 tablet for some time with various leaks and rumors giving us some idea of what to expect. Google I/O 2012 is now up and running and the keynote speech underway and we can tell you that the Nexus 7 Asus tablet that many have been waiting for is newly official and set for a release in July.

This pure Android tablet has excited a lot of Android enthusiasts and the fact that it will launch running the new updated OS, Android 4.1 Jelly Bean is another huge draw. We’ve previously told of how the Google Nexus 7 is set to be extremely competitively priced to vie against Amazon’s Kindle Fire tablet and earlier today we told how it seems that Google wants to take on the iPad as well. We’re pleased to say that the leaked specs we previously offered have turned out to be correct but now we can give you them as officially confirmed.

The Galaxy Nexus 7 tablet has a 1.3GHz NVIDIA quad-core processor and a 12-core ultra- low voltage GeForce GPU, a 7-inch backlit IPS display (resolution 1280 x 800) with Corning Gorilla Glass and 1GB of RAM. It has no rear camera but does have a 1.2-megapixel front-facing shooter capable of 720p video capture and it also has micro USB, WiFi 802.11 /b/g/n, Bluetooth, NFC and Google Wallet support, according to GSMArena sourced from MoDaCo. It’s equipped with a 4325mAh battery for up to 8 hours use.

Dimensions of the Galaxy Nexus 7 are 198.5mm x 120mm x 10.45mm and the weight is 340 grams. As for pricing the 8GB tablet is $199 while the 16GB model is $249. There is no 3G model which may disappoint some people but for a tablet with quad-core processor, Android Jelly Bean and this sort of pricing we think that Google is set to have a big hit on its hands. A report on Slash Gear tells how the Galaxy Nexus 7 is very much pushing the Google Play store and will feature a new widget dubbed ‘My Library’ and the Google Play magazines app is also included. If you want to hear more we’ve embedded an introduction to the Nexus 7 tablet below this story.

We like the look of what we’ve seen so far and we’re really interested to find out your first thoughts on the Galaxy Nexus 7. Will you be purchasing this Jelly Bean tablet? What do you think of the pricing, which to us seems more than reasonable? Let us know with your comments. 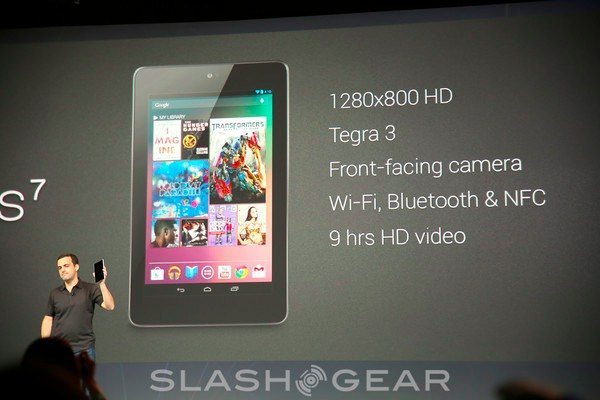