For those of you who missed the news yesterday, the Google Chrome app for iPhone and iPad was finally released for some App Stores. Chrome for iOS has taken off in a big way and has become No. 1 in the App Store already, outdoing the Chrome for Android app.

The Chrome for Android app has also just been released but we told yesterday how it is only compatible for devices running Android 4.0 Ice Cream Sandwich. As that OS update has only been pushed out to around 7% of Android devices so far we should hardly be surprised that the iOS Chrome is far more popular. It seems Chrome for iOS has plenty to offer and you can see a video about Chrome on mobile from Google Chrome below this story.

We heard about the much-awaited iOS Chrome app becoming available through iDownload Blog who picked their highlight as the ability to sync bookmarks and tabs across various devices. BGR points out that the iOS app has already reached No.1 in the U.S. App Store after only a few hours of availability. Chrome for iOS is compatible with iPhone, iPod touch and iPad running iOS 4.3 or later and you can see more or download the app free from iTunes here.

Key features of the app include fast search and navigation, and ability to open and switch between unlimited numbers of tabs. If using an iPhone or iPod touch you can flick through the apps while if you’re using an iPad you simply swipe from edge to edge. The sign in feature enables you to begin right from where you left off on your computer and also send Chrome pages to your iOS device with only one click.

If you want to see a comprehensive hands-on look at Chrome on iOS then head to this Engadget report, which describes many of the features available, details syncing as a “killer feature” and praises the speedy performance, though points out there were a few “hiccups,” which often occur with new apps.

Will you be downloading Chrome for iOS? If you have already downloaded the new app perhaps you could let our readers know what you think of it by sending your comments. 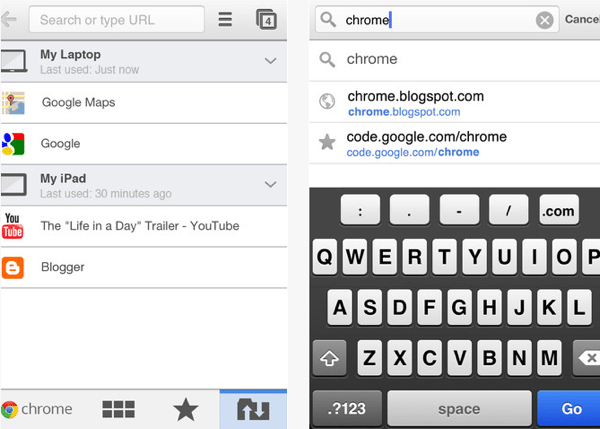 One thought on “Chrome app for iPhone & iPad outdoes Android”