Over the last year or so Spotify has gone from strength to strength with the service becoming available on more platforms such as Facebook among others, and now we have news of the Sonarflow for Spotify app that is visually fantastic.

The application promises to take users on a visual journey of music discovery as iPhone and iPad users can visually submerge into the Spotify universe of eighteen million music tracks. The application is free and features a revolutionary new graphical interface that highlights the artists and tracks into different coloured bubbles.

Once the application is opened users are presented with three bubbles, Country Top Tracks, Starred Spotify Tracks, and Your Spotify Tracks that then require a simple pinch with two fingers to take you to the next level.

Once the discovery mode is enabled the application will recommend music based on the user’s personal taste that is defined by Spotify with further bubbles. Users can then simply touch one of these bubbles to get further information regarding videos, artist, cover art, and ‘Top Spotify Tracks’ that can be played directly by the app. These tracks are played in their entirety instead of being sampled for just thirty seconds like some other apps.

Users can share songs via the app on both Facebook and Twitter and even with no music tracks available on the iPhone or iPad, by using the Spotify account Sonarflow will allow you to discover new music. Users that have already started to use the app have given it favourable reviews and to find out more and to download head over to the App Store. 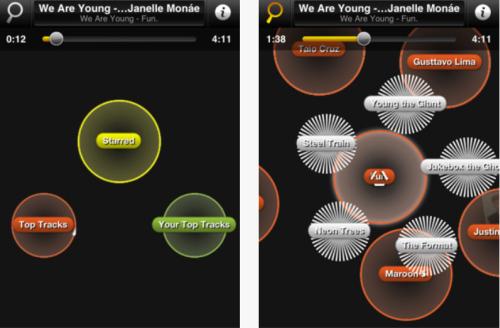