If you are one of the iOS faithful that enjoys such things as looking at spacecraft that explore our solar system, then you might like to know that NASA has now released a new iOS application called Spacecraft 3D, and augmented reality app that shows off NASA spacecraft in 3D animation.

The Spacecraft 3D app for the iPhone, iPod Touch and Apple iPad enables the user to study Earth along with observing the universe by using a printed AR Target and the camera on your iOS device, and basically lets the user that is interested in space vehicles see how they manoeuvre and such.

With the Spacecraft 3D iOS app the user can get close up to robotic explorers, learn all about how their engineering feats expand our knowledge of space, and see just how these spacecraft move.

According to the guys over at Slash Gear the Spacecraft 3D app currently offers two missions, the Curiosity rover that next month is due to land on Mars, and both GRAIL spacecraft Ebb and Flow.

Apparently the Spacecraft 3D app for the iPhone, iPod Touch and Apple iPad will be updated over time with more spacecraft that act as our robotic eyes in our solar system and beyond.

So if you have a penchant for seeing how spacecraft’s work you can download the Spacecraft 3D app to your chosen iOS device for free by hitting up iTunes. 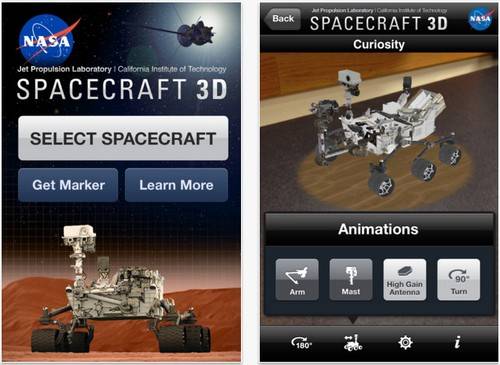