If you are an Android tablet user with children, and your kid’s don’t have a slate of their own to play with, more often than not they grab yours, so perhaps the best way round this is to purchase an Android tablet for your kids so they keep their mitts off of yours.

Thus according to Android Police, there is now a reasonably cheap Android slate for kids called the Fuhu Nabi 2 that will be releasing to the mobile space in a couple of days time, and will command a price tag of just $199.99.

The ICS slate measures 6.05 x 8.69 x 1.14-inches including bumper case, and weighs in at 1.31 pounds with a 4000mAh battery, and is targeted at kids with an age group from pre-k to 5th grade,; however the guys say certain aspects of the Android tablet do go above that age group.

There is one slight downside to the Fuhu Nabi 2 though, as the tablet doesn’t deliver access to Google Play; however apparently you can sideload the Amazon Appstore onto the slate.

For those parents that would like to grab the Fuhu Nabi 2 Android Tegra tablet for their kids, the slate is up for pre-order at Best Buy, Gamestop, and Wal-Mart, and will be coming to both Target and Amazon as of the 22nd of this month.

Any of our readers out there who are parents tempted to pre-order the Fuhu Nabi 2 for their children? 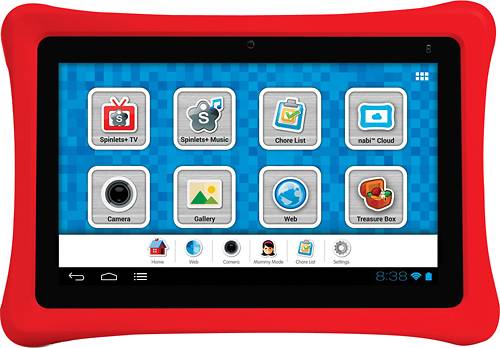