If you are an owner of the LG Optimus 2X smartphone, you are probably quite fed up with all the confusion as to whether the LG Optimus 2X will ever see an update to Android Ice Cream Sandwich, considering LG has previously said the Optimus 2X would not gain ICS, and then stating the ICS update for the device was actually being tested.

However, according to the guys over at Phone Arena by way of Android Greed, it appears that the LG Optimus 2X will definitely not be gaining the Android Ice Cream Sandwich operating system, as LG Canada posted such to their Twitter page.

Just why the Android smartphone wont be seeing the ICS update seems a bit of a mystery as the LG Optimus 2X does sport 512MB RAM along with a 1.2GHz Tegra 2 dual core processor, and as such is more than capable of handling Ice Cream Sandwich, and as the guys point out, the Sony Xperia Tipo sports an 800MHz single core processor, but still runs Android 4.0.

There’s no real statement from LG as to why they have decided not to update the LG Optimus 2X, but perhaps it is because the company is concentrating on promoting their newer devices, including some that already run ICS out of the box.

But it would appear that if you do happen to own an LG Optimus 2X, don’t expect to see Ice Cream Sandwich playing nice on your device unless you install an unofficial ROM of course. 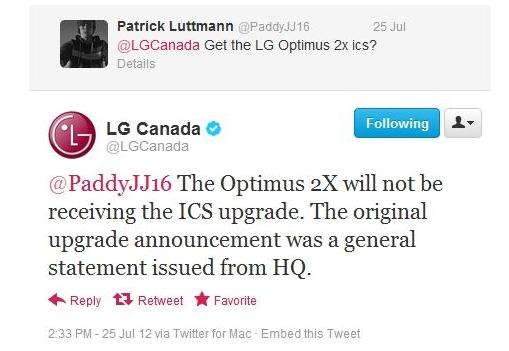 15 thoughts on “No ICS update for LG Optimus 2X”