Official Galaxy Note 2 images and specs leak ahead of release

While Samsung are trying to reverse the recent decisions made in its court battle with Apple over some patent disputes, the company continues to try and offer consumers alternatives to its bitter rivals offerings, and now some official Samsung Galaxy Note 2 images and specs have been leaked ahead of them being released to the public.

It has been widely expected that Samsung would be unveiling the Galaxy Note 2 in the next few hours at a special showcase event in Berlin, and the guys over at Pocket Now have been handed the official press release for the handset. The device will feature a 5.5-inch screen with 1280 x 720 resolutions that will give the handset a true 16:9 aspect ratio, but will have a lower resolution display than the original Note that has 1280 x 800 pixels.

Just like the model it is replacing the Note 2 will sport an HD Super AMOLED display, and will be powered by a quad core processor clocked at 1.6GHz. Other features are set to include 2GB of RAM and an eight megapixel camera on the back with a 1.9 megapixel shooter around the front.

Providing the power for that larger screen will be a 3,100 mAh battery pack, which compares to the originals 2,500 mAh unit. Despite having a larger battery pack the Samsung Galaxy Note 2 will measure slightly thinner than the original at 9.4mm, which compares to the 9.65mm of the older model. Unsurprisingly it will weigh a little more but by only 2 grams, and will come in 16, 32, and 64GB storage options.

Users will also have the option of expanding this further thanks to the microSD card slot, and connectivity wise the Note 2 will also feature HSPA+ 21mbps along with 4G LTE depending on the model. What will please many perspective owners is the fact that the Samsung Galaxy Note 2 will come running the Android 4.1 Jelly bean operating system straight from the box.

Other new features for the Note 2 include some new functionality with the S-Pen, which is also longer and thicker. Air View will allow users to hover the S-Pen over things such as emails, videos, or the image gallery to preview the content without having to open it.

The handset also has a Screen Recorder function that allows a user to record a demonstration of how to use an application. Colour choices at launch will be from either Titanium Grey or Marble White, but we will have to wait a little longer before we get to hear about availability or pricing for the handset. 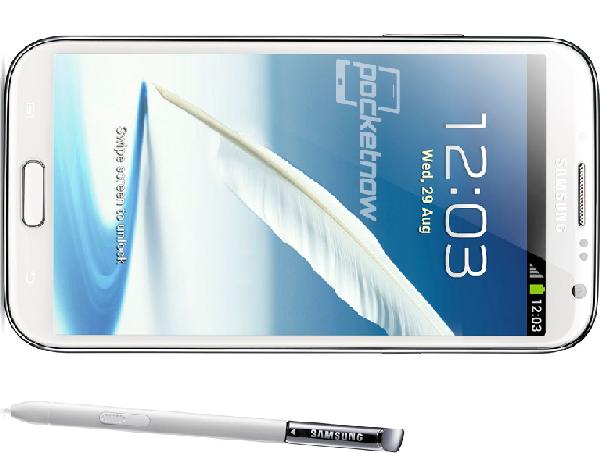