Many gamers love playing games where they need to go round killing wave after wave of zombies, and there are many titles available on a variety of platforms. Today we have news of a just released game called Zombiewood for both the Android and iOS platforms that offers pure Zombie infection.

As it is being reported on Business Insider there have been a number of zombie type games being released, but there may not have been one like Zombiewood. The game uses its movement and firing actions from a variety of rival twin stick shooters, with the blood and gore of Zombie HQ along with hints of Joe Danger as you take the role of a stuntman during the filming of a zombie apocalypse movie.

Users have a number of movies to progress through in the game, and each of these has a series of reels, which make up the games missions with each of them having a number of objectives that provide cash and XP. One scene will see you clearing out loads of zombies or burst fire hydrants to put out burning cars, and another will see you trying to survive wave after wave of attack for a set amount of time. 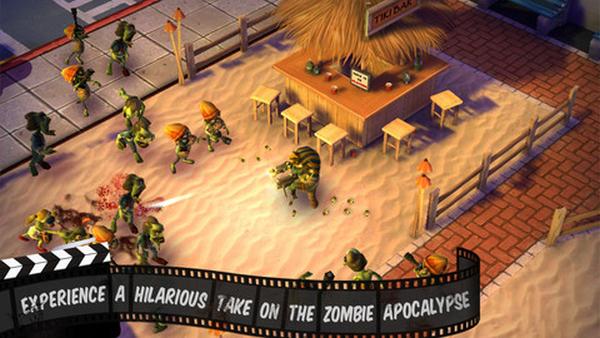 The game has a great deal of variety and uses a two control stick system with one for firing weapons and the other for movement, but in use are not the most responsive that have been seen. The killing of the zombies and reaching the end of the reel sections of a movie, boosts your experience meter, which as you get higher a nice choice of weapons become available.

These include a lovely flame thrower that is perfect for destroying batches of zombies, or rocket launchers that have laser aiming aids. The game needs some strategy coupled with a good aim and is available free on the App Store and Google Play.

Do you enjoy zombie games?