In recent times you always know a certain new smartphone is in the pipeline when we get a constant barrage of leaks and speculation about the upcoming device. It doesn’t matter if the manufacturer or carrier hasn’t officially mentioned the device, leaks will continue to surface, and now a Verizon HTC DROID DNA release seems imminent following more leaked images.

Yesterday HTC and Verizon sent out invites to a special event that is believed will officially unveil the much rumoured HTC DROID DNA, the company’s first foray into the 5-inch smartphone market outside of Japan.

The guy’s over at Droid Life have got hold of an image that you can see below that seems to point that training has already begun inside Verizon stores for the HTC DROID DNA. Sources are claiming that the handset has been handed around at staff meetings, and for holiday events.

This latest image seems to also confirm the name for the device but there is still no concrete news on the devices availability, although there have been some suggestions of November 20th. We have seen a number of leaks for the handset from the evleaks Twitter account, and they have now posted the best image yet of the upcoming smartphone that can also be seen below. 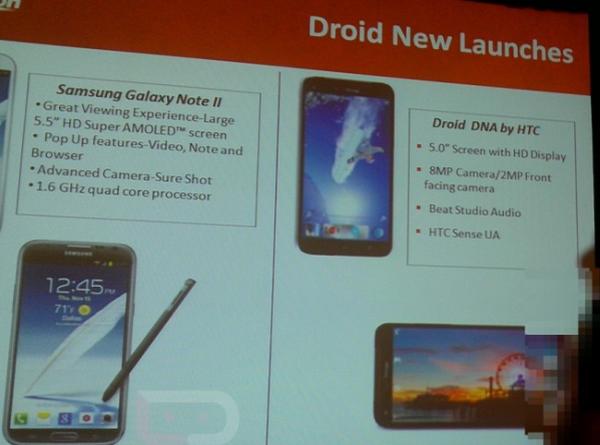 To recap features of the handset are thought to closely resemble the HTC J Butterfly that was recently launched in Japan, which will mean the handset will sport a 5-inch 1080p display capable of providing a massive 440ppi pixel density.

Under the hood is believed to be a quad core Snapdragon S4 Pro processor coupled with 2GB of RAM along with 4G LTE connectivity. From the store image it seems the handset will feature an eight megapixel rear shooter, and there will be a two megapixel front facing camera.

By next week we should know the exact release date for the device, but it makes you wonder if HTC will launch the handset in another guise in other parts of the world such as Europe. Will you be getting the HTC DROID DNA?