The Nexus 4 has been a smash sales success since its release earlier this week. In fact the launch was so successful that it sold out within hours. This much-acclaimed smartphone with some top-notch specs at an extremely reasonable price runs the latest Android 4.2 Jelly Bean operating system and seems to have become the smartphone darling of the moment. Today we wanted to give readers an idea of the internals of the Nexus 4 and the verdict from a teardown that reveals all.

The LG Nexus 4 is the latest pure Google Nexus phone and so was always going to popular with avid Android enthusiasts. Mixing this with a low unlocked price from the Google Play Store and some high-end specs led to a quick sellout and yesterday we told how some people’s orders had been delayed while others haven’t even got the option to order with a sold out message displayed on the site, asking people to check back later. Although the massive demand for the phone seems to have caught Google out, we can only hope that more stock will be available shortly in time for Christmas. While we all wait we thought it would be interesting to look at the internals of the Nexus 4.

As a brief recap on specs we’ll remind you that the Nexus 4 has a 1.5GHz Qualcomm APQ8064 Snapdragon quad-core Krait processor, 4.7-inch True HD IPS display with resolution of 1280 x 768 and 318ppi, 2GB of RAM and an 8-megapixel rear camera with 1080p video capture as well as the new PhotoSphere feature and also a 1.3-megapixel front-facing camera. It also runs on 4.2 Jelly Bean and as a pure Nexus phone will always be one of the first to receive future Android OS updates. The only snag of any real significance is that it only comes with only 8 or 16GB of internal storage that is non-expandable but many potential customers will forgive this considering everything else the phone has to offer.

Onto the teardown and this was carried out by the renowned team at iFixit. As usual with teardown details we urge readers not to try disassembling their devices themselves, best to leave it to the experts. It’s always intriguing though to really delve inside a device and iFixit always gives products a repairability score as well. The step-by-step dismantling begins with the removal of the Micro SIM card before removing the back cover. One of the initial things spotted is that the battery is pretty trick to replace, something that could impact on the Nexus 4’s repairability factor. 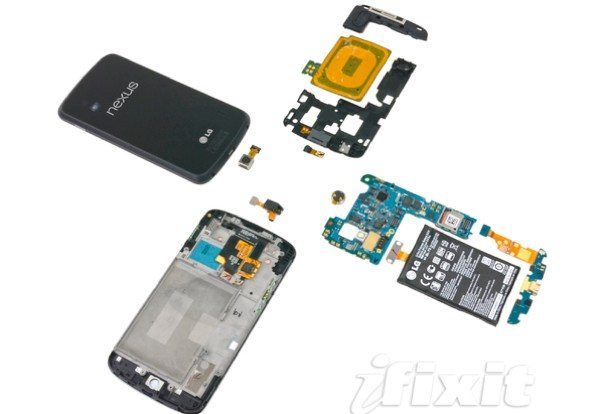 On the other hand the repairability factor is almost immediately bumped up again with the fact that the speaker enclosure is so easy to remove and the amount and different lengths of screws that have needed to be removed by this stage is much less than on some other devices. Another plus point is that the motherboard is pretty easy to disconnect leading on to the removal of the cameras.

The list of components on the front and rear of the motherboard is too long to detail here but just some of the inclusions are a Toshiba THGBM5G6A2JBA1R 8GB Flash, Qualcomm WTR1605L Seven-Band 4G LTE chip, Avago ACPM-7251 Quad-Band GSM/EDGE and Dual-Band UMTS Power Amplifier, Qualcomm MDM9215M 4G GSM/CDMA modem and Qualcomm WCD9310 audio codec. Following this, freeing the daughterboard reveals the micro-USB port, spring contacts for the speakers, antenna socket and microphone. The 3.5mm headphone jack is then removed from the front panel where the dual ambient light sensors also reside.

In conclusion a repairability score of 7/10 was granted for the Nexus 4 with plus points being the easy opening, a low screw total and the fact that pressure contacts made inner components easily replaceable. Negative points were the difficulty in removing the battery and that the glass front is fused to the display and also the display frame. To see many more details and full images head to the earlier iFixit link.

We’d like to hear your thoughts on the Nexus 4, the huge demand for it and of course details of the internals so let us have your comments on this. Have you been fortunate to get your hands on the Nexus 4 already? Maybe you’ve added it to your Christmas wish list?