Once the Big Red shuts down Vcast, the number one carrier in the USA will switch their focus towards a free video service known as viewdini, which is available as a mobile app for both Android and iOS devices. However Verizon customers should be made aware that the closure of Vcast will not affect current data or calling plans.

The viewdini mobile application for both iOS and Android devices have been available for both platforms for a while, and is a free application that enables users to search for and browse TV shows, web videos, and movies on their smartphone or tablet. 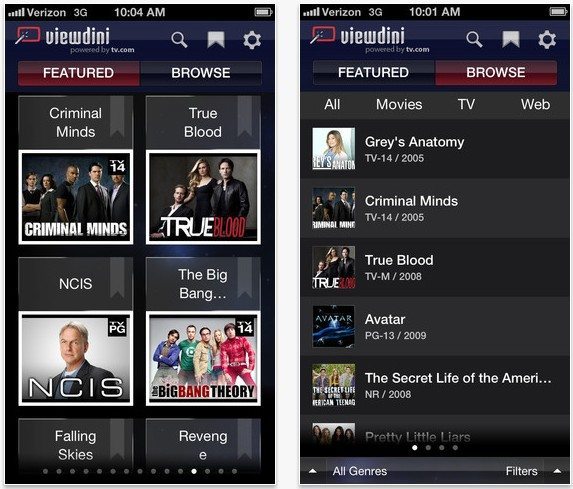 The viewdini app offers such services as Netflix, Xfinity, mSpot, Hulu Plus and more, whilst when is comes to NFL content, Verizon has stated that users will need to download and subscribe to NFL Mobile.

Verizon Vcast was introduced way back in 2005, and then came to the Android platform back in 2010, and offered such things as live sporting content along with TV shows from such networks as CBS, Comedy Central, Nickelodeon, and NBC. However it appears that the Big Red feels the service is now getting on in years and has decided to shut it down.

The reason for the closure is apparently so that Verizon can better serve the demands of their customers, and the closure of Vcast will allow the carrier to focus on delivering the best video experience in wireless, namely viewdini, which they say is a new video service for 4G enabled Apple and Android devices.

For those Verizon user that will be downloading the viewdini app to their chosen device either from iTunes or Google Play, but would like to know a bit more about how the app works, we have a viewdini for iPhone review video for your viewing consideration below. So hit that play button to check out the footage.

Thus is would appear that the viewdini app has some problems, so we’d like to hear from any of our reader that use the viewdini app to let us know their opinions by dropping us a line to our comments area below.

One thought on “Farewell Verizon Vcast, so download focused viewdini”