Apple shares have taken a drop on last years report and today we can see the shares running at $491.83, which is -9.92â€Ž (-1.98%) – This could all be down to weak demand after Apple slashed its iPhone 5 spare part orders, of course there could be a number of reasons but this is one that sticks out more than most.

Last year around this time Apple was way up at around $700 so to see the giant’s drop below the $500 share price drop is huge, Apple planned to do very well with the iPhone and we cannot say they haven’t but after the company’s orders for iPhone 5 screens dropped by half of what was planned could be a big factor why shares have plummeted by $200 in one year.

Is this the case of Android stepping up its game and hurting Apple? Approximate figures of around 70 to 75% for Android smartphone shipments in the three months ending in September period could be another reason why Apple is falling; in 2011 the same period saw Android shipments at around 58%. 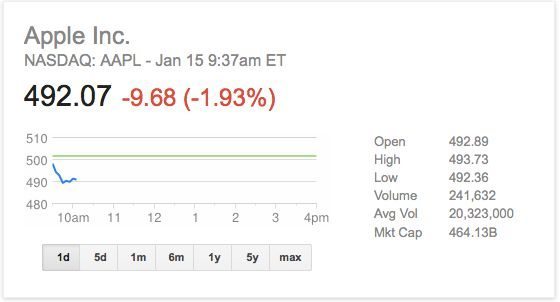 Samsung and Google as well as the Android operating system has seen a massive increase over the last year, and with Samsung taking over Apple as one of the largest smartphone suppliers by market share has seen a 50 percent unit increase. The last time we here at Phones Review looked at figures we have seen a massive increase for Google with over 500 million Android devices activated in the last four years, Apple sold around 270 million iPhones since the end September 2011 when they started back in 2007.

Apple shares could be dropping due to the company’s iPhone releases, they went from the iPhone 4 to the 4S and then from the 4S and these were not major changes and then it went to the iPhone 5, so the next obvious release will be the 5S. We have the iPhone 5 and have had nothing but problems with WiFi even after the latest update, the chips the 5 is facing is totally rubbish and deplorable that many have spent a lot of money only to see their smartphone get damaged from no cause of their own. We have to admit we have been using the Samsung Galaxy Note 2 a lot more than the iPhone 5 when indoors.