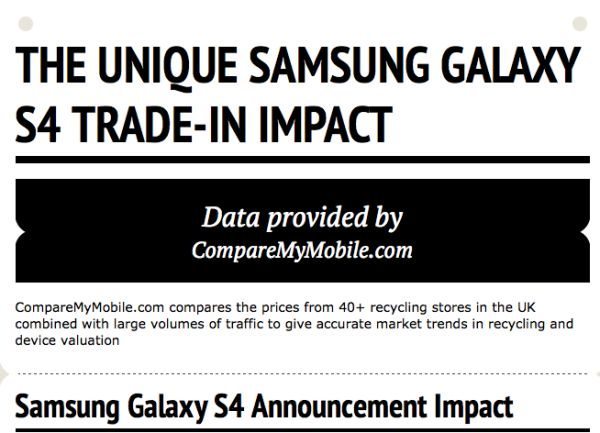 Leading mobile phone recycling comparison site CompareMyMobile.com has told us that the buzz surrounding tomorrow’s Samsung Galaxy S4 launch has had a huge impact on online valuations and trade-ins — and that’s before the new smartphone has even been released.

The site has seen a 127% rise in Samsung valuations in the run up to the long-awaited date, with an added 29% spark in actual trade-ins. Additionally, Samsung’s online trade-in market share has risen by 4%, resulting in the brand making up 17.2% of all devices traded-in. This data suggests massive excitement surrounding the latest gadget, with people selling their devices to upgrade to the latest model.

Apple has taken the biggest hit in the run up to the S4, with their trade-in market share dropping to 44% – 6% less than before the initial announcement. Blackberry holds the second position in the top traded brand list with a 19.3% share, although if the site sees another large rise in Samsung trade-ins, CompareMyMobile.com do say that could still change in the near future.

For mobile phone recycling comparison site CompareMyMobile.com, this is the first time a non-Apple phone has had such a mammoth impact on trade-ins.

Co-founder of the site, Ashley Turner, says,
“For the first time in almost 5 years of running the site we’re seeing a non-apple handset release greatly impacting phone recycling figures. The iPhone 5 set the bar by increasing trade ins by over 300% back in September – We’re excited to see how the release of the S4 will impact trade ins within the first month of release.”

The statistics also show a slash in the value of Samsung devices. Usual data from CompareMyMobile.com shows a depreciation of 10.94% in Samsung gadget value over a period of 90 days — but this announcement seems to have sped up the process, with a value loss of 10.85% within 24 days.

The top 5 traded-in devices from Samsung have seen a particular price drop, with a total reduction of 12% in value. But, these top 5 Samsung gadgets still remain highly popular trade-ins, making up 12% of all sales, according to CompareMyMobile.com. This highly reflects the huge volume of sales by the brand in the past two years, taking advantage of a slower pace from Apple to steal their trade-in market share, as well as that of other competitors.

CompareMyMobile.com tell us that these statistics are so unique, with consumers showing an immense loyalty to Android devices. But with Apple still remaining the top traded-in brand by a large percentage, the site still expects a huge surge in Apple trade-ins alongside their next announcement.

Do you want to see how much you could get for your old device before upgrading to the last Galaxy device? Track your devices pricing using their mobile app or visiting their website. Please take a look at the unique Samsung Galaxy S4 unique trade-in impact infographic below.