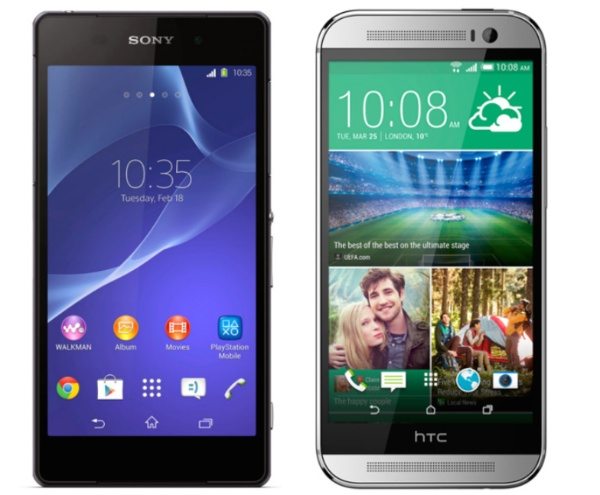 The HTC One M8 and Sony Xperia Z2 are new flagship smartphones to the market and are both Android devices. There has been big anticipation for both of these handsets and many people may have these on a shortlist. Today we’re looking at the Sony Xperia Z2 vs. HTC One M8 in a specs rundown, to show how they compare and what they each have to offer.

Processors
The Sony Xperia Z2 has a 2.3GHz Qualcomm Snapdragon 801 quad-core processor and Adreno 330 graphics. The HTC One M8 has exactly the same arrangement, except that for some regions it steps up to a 2.5GHz variety.

Color Options
There’s a choice of Black, White or Purple for the Xperia Z2 while the One M8 comes in Gunmetal Gray, Glacial Silver and Amber Gold, with a Red option also rumored to be on the way.

Obviously this doesn’t take into account the features and designs of both phones, but it will give you an idea of what you can expect. Both phones have the usual array of connectivity options for top-end smartphones, but we should point out that the Xperia Z2 is also dust proof and water resistant to IP58 standard.

If you want to check out much more on either phone head to these links for the Xperia Z2 or for the One M8. Taking into account the specs of each of these devices would you choose the Sony Xperia Z2 or the HTC One M8?