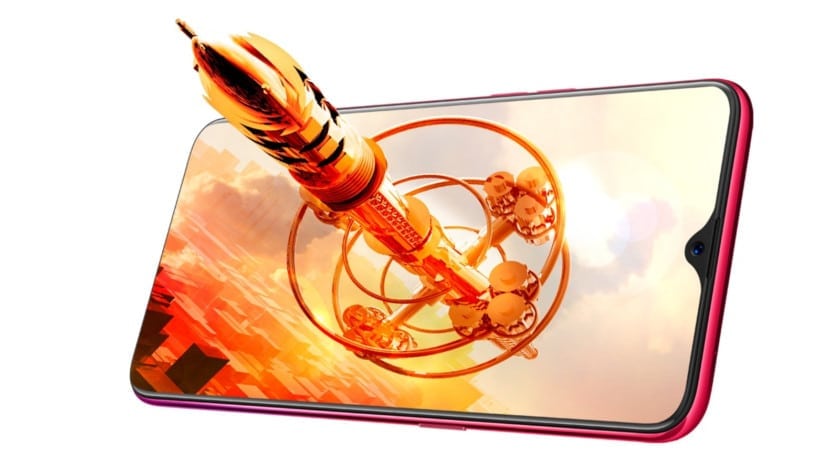 Oppo might not be a name you search for first at the local carrier store when buying a new smartphone. But, they have also been in the news a lot lately. The Oppo Find X is one of the few smartphones to have a full-view display. Thanks to the motorized top part which houses the cameras and sensors, Oppo managed to achieve that. Now, they have a solution for those that want a bigger screen without a big or any notch. The waterdrop notch is looking quite similar to the one on the Essential phone. And Oppo has implemented it in some of their newest devices. One of them is the Oppo F9, a midrange device with a serious punch under the body. Let’s take a closer look at it!

Starting with the design, the Oppo F9 sticks for the most part to the competition. You won’t find anything especially exciting or distinctive from other smartphones. It’s made from aluminum, a common build material for phones of this budget. The rear camera setup is in the top corner, with the fingerprint sensor in the middle. Edges are curved and give you a nice feel in the hand, but it can be a bit slippery. On the front, the 6.3” FullHD+ LCD screen with 19.5:9 aspect ratio takes place. As I said before, it has a notch, but it’s way subtler than others, like on the iPhone X. It’s a nice implementation that doesn’t take a ton of space from the display, giving you more screen estate. The bezels are also incredibly small.

For the performance, the Oppo F9 is aimed towards the midrange market. Starting with the chipset, Oppo opted for the Helio P60 processor from Mediatek. It’s capable of handling most tasks you throw at it. And accompanied by either 4 or 6GB of RAM, it should be more than enough even for the most notorious multitaskers. Furthermore, the device is capped at 64GB of internal memory. Rounding up the internals, the 3500mAh battery will easily last you through a full day of use. It has the company’s signature VOOC Flash charge that should give you two hours of talk time in five minutes.

Jumping over to the cameras, the F9 is equipped with a dual setup on the back and a single shooter on the front. Starting with the back, you’re getting a primary 16MP shooter with f/1.8 aperture and a secondary 2MP shooter with f/2.4 aperture. As you’ve probably guessed, the secondary shooter is used as a depth sensor, enabling portrait mode shots. As for the pictures, they’re decent, with good dynamic range and high color saturation. The same is true for the front. The 25MP shooter with f/2.0 aperture is an excellent camera if selfies or vlogs are your game.

Finishing with the software, the Oppo F9 runs Android Oreo 8.1, with the company’s ColorOS skin on top of it. It’s running smoothly, and packs in a lot of different features and customization options.

The Oppo F9 is currently available in Vietnam and the Philippines, with more markets to come in the upcoming months. Prices start at around $332.

So, what are your thoughts on the Oppo F9? Share them in the comments below.