Ok so the Google sponsored mobile phone operating system in the way of Android is very good news indeed that most of us are intrigued by for mobile phone land, but the question has to be “What if you really had your heart set on some Google hardware? Ok that is not much of a question but hey we like to ask anyway.

According to Forbes they have the low down on an HTC device labeled the “Dream” why on earth it is called the Dream we have no idea but it is pretty catchy, the picture shown above looks pretty good and it could very well be rumored hardware of legend plus it could be hitting the market as early as next year which is even better news. 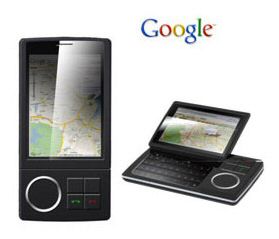 The news goes on to say that the new mobile phone is one of about five prototypes in the making that Google had to build to demonstrate the Open Handset Alliance software to potential members, Peter Chou from HTC has said that in the 2 years its been working on OHA designs and that this is the best one we’ve seen.

The device which measures 3 x 5 inches boasts touchscreen and navigational controls at the base plus a pretty cool full swivel out keyboard and when swiveled the screen goes from portrait to landscape mode. There is limited info on the actual hardware but the software apparently has some time sensitive touch controls that will expand your area control the longer you touch it.

HTC is considering a commercial version of the phone, which we could be seeing as soon as the second half of 2008. Now I am really intrigued to see this so blooming hurry up and send me a prototype. LOL.