This Bluetooth headset will work wonders when paired to your mobile device, this headset is in a piano-black finish and has cool lines, the thing that stands out the most is that this headset has no buttons, yes button free my friends because it has touch-sensitivity technology.

This is bringing this headset into the 21st century and will be a fashion statement to say the least, the Bluetrek SENSE Bluetooth headset is only 5 cm long and only weighs a mere 8 grams, but even it being so small still packs a punch with all the specs to talk about.

The Bluetooth headset features dual-color LED display, 4 hour talk-time and 5 day stand-by time, voice-guided operation, touch-sensitive main-button (it is not a button because you just touch it baby). 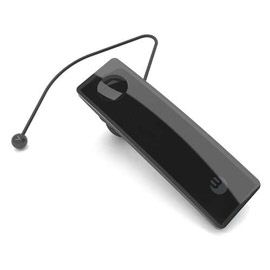 Main features & Specs —
– Up to 4 hours talk time plus up to 5 days standby time
– 50 mm (L) x 15mm (W)
– Up to 10 metres range
– Voice Alert: A pre-recorded voice alerts users to low battery levels and missed calls and also confirms your choice of function such as connecting or disconnecting your headset, redialing your last number, rejecting a call or contacting favourite numbers
– Bluetooth V1.2

You can wear the headset with or without the ear hook; this all new Bluetrek SENSE touch-sensitive Bluetooth headset will hit the market early 2008 for Â£49.99.