One in eight US households no longer have a traditional landline moving over in favour to the mobile kind. According to a new survey by the National Health Interview Survey indicates 13.6% of US households have thrown their landlines out and opting to use mobile phones as their main communication device.Households moving over to mobile communication only has been on the rise since 2003, with the most recent numbers suggesting —

More than 30% of those aged 25-29 rely solely on mobile phones; almost 30% of those aged 18-24 shunned landlines; 13% of adults in the 30-44 age group are landline-free; about 7% of people 45-64 used only cell phones; while only 2% of adults 65 and older shunned hard-line telephones More than 55% of adults living with unrelated roommates used only their cell phones .28% of renters were wireless-only, compared with 6.7% of homeowners .Men were more likely than women to be landline-free -Â a trend that has persisted throughout the years 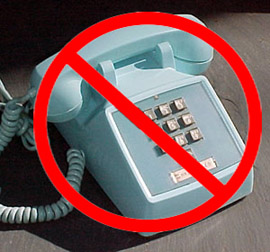 However looking at other figures show that mobile phone only people are twice as likely to binge drink, more likely to be a smoker, and twice as likely to report not having life insurance. Having said that those same people reportedly are in excellent health by taking part in extra physical activity.Source — RCR