SMS to play a larger role in US elections

The US is way behind Europe and Asia in the texting stakes, as countries all over the globe have been using SMS as an effective method to vote in elections for years, and although there have been attempts in the states, there hasn’t been a real concentrated effort to bring measurable results.However, this may change over the next few years as youngsters in the states are more likely to send and receive text messages, and well politicians often look for new ways to shout their message to the populace. The AFP states 3 Democratic candidates running for the presidency in 2008, Clinton, Edwards, and Obama each have SMS short codes set up so mobile users can subscribe to updates, and as yet no Republican candidates have followed suit.

A Princeton grad student did a study whereby it came to the conclusion that those who received text messages shortly before an election were 4% more likely to vote, and although 4% isn’t much it equates to a massive percentage during an election. 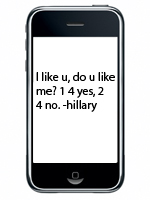