Seen earlier at the FCC here is the E-ten Glofiish X650 smartphone which is supposed to copete against Apple’s iPhone. The Glofiish doesn’t look at cool as the iPhone however it does offer forth some features which the iPhone lacks, like full VGA touch-screen, FM transmitter, FM tuner, and GPS receiver.

With the E-ten Glofiish X650 you also get a 2 megapixel camera with auto-focus, microSD expansion slot, Bluetooth, Samsung SC3 500 MHz CPU, 64MB RAM and 256MB ROM, all encased in 107 x 58 x 14.7mm’s and weighing 136 grams, and will be available in purple and black. For more information you will find the official press release below the image. 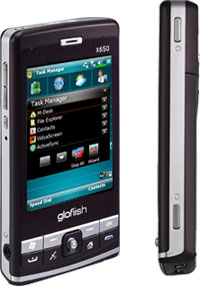 PRESS RELEASE – E-TEN Information Systems has announced the Glofiish X650, the company’s latest Pocket PC Phone to offer the benefits of all-in-one connectivity, VGA display, and an ultra-compact form factor.E-TEN first introduced the option for a VGA display in May and since then has added several more models to its product lineup aimed at different customer needs.

The latest X650 is designed to appeal to those seeking a compact, full-featured device that is also affordable.A VGA display offers several significant benefits to the user. The greater resolution (four times higher than that of a typical Pocket PC Phone) enables a larger proportion of a document, calendar, map, or web page etc. to be displayed on screen at once, increasing productivity.

Additionally, the higher pixel density means that text appears sharper and easier to read while pictures and video appear more detailed. VGA is set to become one of the key specifications for Pocket PC Phones in the coming year.

Specifications of the X650 include a Samsung SC3 processor at 500Mz, 256MB ROM, 2-megapixel auto-focus camera, FM Tuner, and FM Transmitter (subject to region). Dimensions of the handset are an ultra-compact 107 x 58 x 14.7mm with a weight of just 139g.The Glofiish X650 is offered in two color choices, black and purple, and should be available worldwide in two to three weeks.