Out in the wild the ripoff Meizu M8 miniOne: Video

There has been an abundance of prototype mock-ups and renderings of the virtually mystical Chinese rip-off of the Apple iPhone the Meizu M8 miniOne right for the launch of the iPhone, but no one has ever got hold of one. The closes has been over at Engadget Mobile and their coverage of CeBit 2008, they saw the Meizu M8 prototype at the Meizu booth and made a couple of vids covering it. 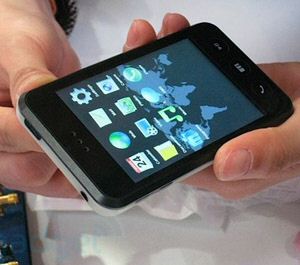 Meizu demonstrated a little of the Meizu M8 interface but only on an engineer’s reference board; these rip-off guys have had more than enough time with this you’d think they would at least be past the reference board stage wouldn’t you.

So apparently now it’s all a matter of waiting for Meizu to bring thie Meizu M8 miniOne to the open market, and then watch Apple kick their asses into legal lawsuits.

Here’s a video of the Meizu M8 miniOne, for more go hereÂ