Police raided several booths at CeBIT in Germany including Meizu’s, who along with others were asked to leave the showroom floor with almost all their display materials. Heise, a local newspaper reports, police announced on Wednesday morning that the Meizu booth had been shut down because of copyright issues with some of its product portfolio.

Now it is common knowledge that Meizu along with their Meizu M8 miniOne has constantly been a major draw over copyright and trademake infringement issues. This is why so many assumed the raid and shut down was the result of the Meizu – Apple argument over the iPhone and Meizu M8 miniOne. 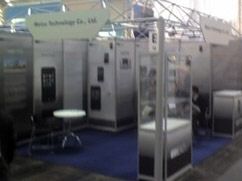 However, the result is somewhat different as it turns out the Meizu M8 miniOne was the copyright offernder but licencingÂ  problems over one of Meizu’s portable music players, (which by the way looks similar to Apple’s offerings within the market)

So Meizu is back all in order and on the showroom floor at CeBIT, and still displaying the Meizu M8 miniOne, but now all reference to the music player has vanished from the displays.