This Motorola concept is the design of Parisian designer Lysandre Follet, and at first glance you’d think noting unusual, pretty standard with Bluetooth, multimedia player, WiFi and such. However take a closer look and you will note that this mobile actually has two cameras.

Two cameras you say, big deal, we’ve seen two camera mobiles before! And you’d be right; it isn’t uncommon these days to see a mobile handset with a camera on the front and another on the back. Well this Motorola concept differs somewhat because the cameras are placed side by side. 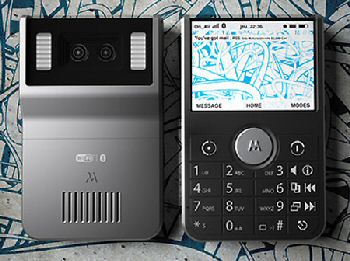 Just think of the fun and possibilities you could have with side-by-side cameras. You could maybe place blue transparent gel over one lens and red over the other and take 3D photos! Or have one camera doing video while the other snaps images for multitasking. All possible I would presume, but as yet no word of if this snazzy concept will actually make it to production.