Will the Motorola Z9 with AGPS connectivity be a phone contender?

News of the Motorola Z9 RAZR was leaked last July, but it has taken Motorola nearly a year to get it launched. No one is sure why but it now looks as if it’s ready to be shipped.

The Z9 first appeared in a promotional video by Motorola which was headed for CITA, then they had the nod from FCC that they could bring the RAZR Z9 to the AT&T wireless network.
There was a promotional sales leaflet for the Z9 which appeared on the net, it was mainly just confirming the specs of the Motorola Z9 and these details below were included. 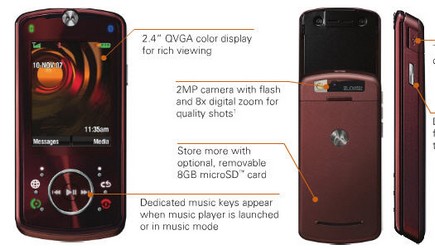 The phone also has Windows Media 11 music manager and AGPS connectivity and the internal memory is 45MB and it will support a micro SD memory card up to 8GB and has Crystal Talk which is for better voice quality. However, it does only have a 2 mega pixel camera.