The appearance of “iPhone Black” on the AT&T model selector earlier today was apparently an oversight as an official statement from AT&T says…”The reference to ‘iPhone Black’ was simply a temporary placeholder used over the weekend for a scheduled catalogue update. It was meant to temporarily distinguish the various iPhone models-4GB, 8GB and 16GB-but was never reassigned. We’re changing the site now.”

So basically 3 models of Apple iPhone with just 2 placeholders, the iPhone and iPhone Black, makes perfect sense right? I mean like “black” is so much easier to remember than say 4, 8, or even 16GB, even though all signs recently point to the next generation Apple 3G iPhone having a glossy black casing. 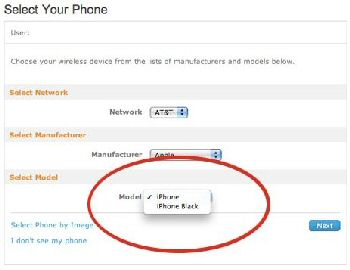 Yep, seems the powers that be at AT&T thinks we are all lacking in the brain department, so I wonder if when they do announce the Apple 3G iPhone they’ll say… “Oh look, wonder if we should put the iPhone Black back in our placeholder!” Fabrication or fact? You decide.