The sheer magnitude of rumours on the Apple 3G iPhone swamps the internet’s rumour channels, everywhere one looks there is mention of Apple’s highly expected next-generation iPhone. Although it would be somewhat amiss of us if we were to simply let this one slip by and a disservice to our readers as well.

Intel’s chief German Burgermeister, Hannes Schwaderer added another layer of polish to the perennial Apple touch-screen tablet rumour mill yesterday by stating unmistakably that Apple will be using the new Intel Atom processor in a future Apple iPhone, which is slightly larger than the existing version due to a larger display screen.

And of course this is not the first time Intel has candidly discussed Apple’s plans to develop commodities which will be based on Intel’s Centrino Atom, (MID) Mobile Internet Device platform. AppleInsider and MacRumors have pointed out that an older rumour calls for a new multi-touch Apple tablet to be launched mid-year incorporating a 720 x 480 display and on a mobile device said to be approximately 1.5x the size of the current version of the Apple iPhone. 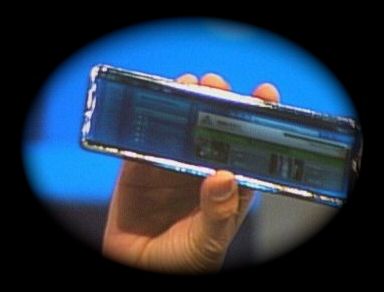 Intel officially launches Atom in June while Jobs’ next keynote is scheduled for 9th June, so it wouldn’t surprise most to see Otellini up on stage with a multi-touch Newton in hand, well maybe it would be a tad surprising. By the way that image of Intel’s concept MID is from Mr. Blurry’s cam.

An update for you all: ZDNET.de has actually printed a disclaimer from Intel saying that ZDNET has got the whole thing wrong. It appears that Intel now claim that Schwaderer’s comments are generic and not based on any specific knowledge concerning any possible future Apple iPhone models.