Word on the web is that we will soon be seeing a new Windows Mobile twin SIM mobile unveiled by E-TEN at Taiwan’s Computex next month, that’s two SIMs. The new mobile phone is part of E-TEN’s Glofiish series and is called the DX900, and is supposed to be quite a powerhouse of a mobile.

The DX900 is tri-band UMTS/HSDPA and quad-band GSM/GPRS/EDGE, with FM radio, GPS motion sensor, 3 megapixel auto-focus camera, VGA display, 256MB ROM and expansion via microSDHC. The DX900 is reportedly to run on Windows Mobile 6.1 Professional, and has Bluetooth 2.0+EDR along with WiFi b/g, all being powered by a Samsung CPU. 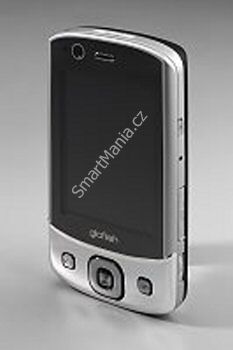 The E-TEN has a 2.8 touch-screen 640 x 480 pixel, and also has a front facing QVGA camera for its UMTS video telephony. Unfortunately the E-TEN DX900 lacks the mobile TV that the E-TEN V900 has. The DX900 measures 106 x 60.5 x 17mm with a weight of 147 grams.
Well that’s about it so far on the E-Ten DX900 mobile phone, other than as yet a price or availability hasn’t been announced. As more information becomes available well keep you up to date.