Pre-pay option on Apple iPhone 3G in Portugal via Optimus

The guys over at Boy Genius Report have apparently be informed via reliable sources that Portugal based Optimus, a subsidiary of Orange is to offer the Apple iPhone 3G as both post and pre-paid options. This obviously now means Apple’s revenue-sharing deals are well and truly out of the picture and have now made this possible.

AT&T have firmly stated they will not be selling the Apple iPhone 3G with any type of pre-paid option but is seems that other carriers are of a different mind, although don’t expect AT&T to follow in others footsteps. 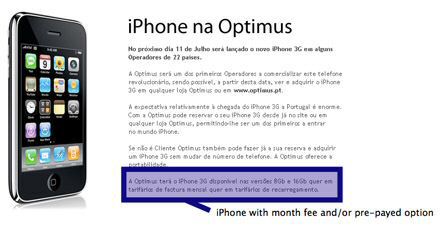 However, I wouldn’t expect to see an abundance of low prices with a pre-paid version of the Apple iPhone 3G, as it is more than likely to fall in line with the unlocked prices reported earlier, roughly 8GB iPhone 3G = 499 Euros and 16GB iPhone 3G = 569 Euros.

My personal view is why not have pre-paid options? Many people just don’t like the idea of being confined to a long contract with their mobile phone, they like the option to e able to change or upgrade as and when they like, and maybe it’s those people who Optimus is trying to target with its pre-paid option.