Is it a flashlight? Is it a lightsabre? No it is a new mobile phone patent by Nokia

Certainly strange looking but it appears Nokia have another take on the Nokia Tube lined up. This new patent coming from Espoo proves there is absolutely no end to patentable ideas, as Nokia has applied for this patent pertaining to a tube-shaped mobile phone, see you thought we were on about the Nokia 5800 XpressMedia Tube, but we weren’t; nope take a look at the patent image.

It is certainly one of the strangest patents for a mobile phone we’ve seen. A cylindrical body with a “ribbon” which slides up and down along the device’s lengthwise axis, the reason for this apparently is that this patent will have two different UI’s which will be differentially activated depending on the “ribbon’s” position, (sounds cool doesn’t it?) 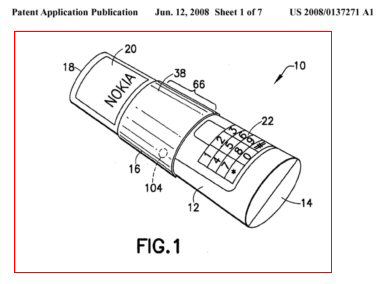 Also by manipulating the “ribbon” upwards the device reveals the camera mode, while sliding the “ribbon” downwards it will work as a more traditional mobile phone. Clever, yes, workable, not sure, marketable, doubtful.

Ok to be honest it’s something out of the ordinary for the normal mobile phone user, and would probably take some getting used to, but then if we didn’t have these wild and wacky ideas once in a while wouldn’t the mobile world be a tad boring? Who knows everyone may love the idea of carrying a mobile phone that looks like a flashlight, then again…