The Battle is looming RIM and Apple prepare for smartphone war

A previous survey by ChangeWave showed that the Apple iPhone and iPhone 3G pretty much domineer the US smartphone market and has done for some time, the survey indicating that the iPhone 3G would have a “tsunami like impact”

Now ChangeWave has released another survey and it shows that Research In Motion and their BlackBerry are not taking the Apple iPhone’s dominance lying down.

According to the data Apple and Research In Motion are lining up for a full on blown out battle for the very lucrative American smartphone market. 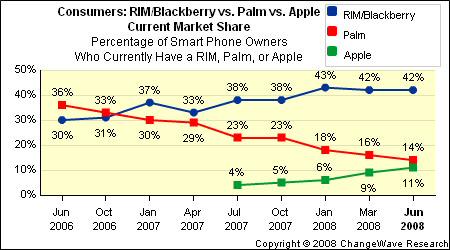 While Apple’s iPhone 3G still holds the lead, RIM chases in a strong second, and with an installed user base that exceeds that of the iPhone RIM’s BlackBerry line-up should promise for a good hard blood spilling battle. 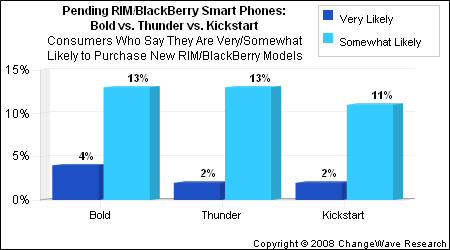 The founder of ChangeWave Research, and editor of ChangeWave Investing, Tobin Smith says: “The real losers in this smart phone battle will most likely be the second-tier players, who could find themselves increasingly pushed to the sidelines as the two Goliaths battle for market dominance.”