Vodafone expects to launch the HTC Touch Pro this month according to their online store, although this could be wishful thinking on their part, but I guess they covered themselves if it doesn’t happen by the “Expected”.

The HTC Touch Pro had all the style and elegance of the HTC Touch Diamond but incorporates a sliding five row QWERTY keyboard as well for those heavy messengers out there in text city. 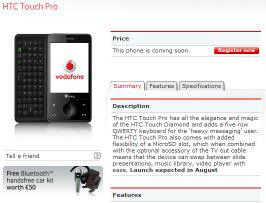 Personally I can’t see Vodafone putting that “Launch expected in August” without some little tip off from HTC that the HTC Touch Pro could well be with them this month. Maybe they have a hot-line with HTC and are whispering on a daily basis, so keep an eye on that product page to see if it disappears.

Always good to see a notice of impending launch on a carriers site, now if there are any other carriers out there who would like to do the same you won’t hear any complaints from us.