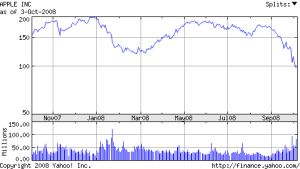 We take a look at Apple Inc position in the stock market, with the creation of the iPhone the irresistible smartphone with its simple operating system and user interface this phone has well and truly fired up the handset world, with the addition of the iPhone 3G the smartphone that’s competitive price edge and push email function it’s helped Apple’s iPhone become even more desirable to the consumer.

Stocks at a glance, on October 2, stocks were below $100, which is a huge decrease from the value in August ’08 at $180, the chart looks pretty scary, if you have been looking to buy a slice of the Apple this could be your chance.