Is the new Nokia 5800 Xpressmusic better than the iPhone?

I find myself reading on several websites that the new Nokia 5800 is the first real competitor against iPhone. Usually there are a lot of opinions and subjective statements from either side, and of course it’s difficult to do a proper evaluation when the new Nokia isn’t even out yet. However I though I should do my best to do a proper comparison of the two mobile phones.

1. The camera.
I think the Nokia 5800 wins this round. It is provided with a 3.2Mpix camera with Carl Zeiss Optics and dual flash. The iPhone on the other hand mounts a basic 2Mpix camera, without flash.

2. Input methods.
Nokia 5800 has the new handwriting feature, similar to the palm computers. I haven’t tried it myself, but if it works properly I’m sure it will be very practical instead of typing if you want to write a quick sms or note. The new Nokia also has a plectrum. This one I’m not so sure about. It doesn’t seem extremely useful. But of course if you don’t need it just throw it away.

3. Battery.
Nokia seems to be better at this one as well. However we can only go on the specifications for the Nokia 5800. The iPhone specifications mention a standby time up to 300h, audio playback up to 24h and a talk time of 5-10h depending on if you use 2G or 3G.
In the specifications on the Nokia website for the 5800 they claim it will have a standby time of 16.7 days that should equal approximately 400 hours. Talk time very similar to the iPhone and audio playback of 1.5 days which should be 36 hours. Although as I said before these are specifications. As we all know it’s usually much lower than this especially when you have used your phone for a while. So there is not many conclusions we can draw from this more than that Nokia claims to have a little better general battery time.

4. Video recording.
This is interesting. The iPhone is not capable of video recording yet. Sure on jailbroken phones I have read it could be possible but the Nokia 5800 has video recording as a standard application. You should also be able to do video calls with your friends which is not possible with the iPhone. 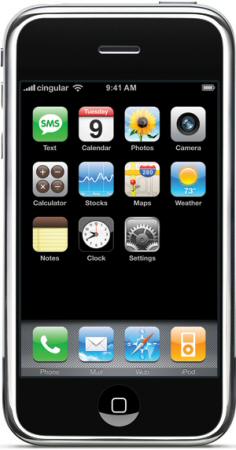 6. The price.
Nokia claims the price will be 279 euro. Which should be less than the price of the iPhone? I guess this is one of the main advantages of the Nokia 5800. They are quite similar but the lower price probably appeals to a wider range of customers. Sure we don’t know how apple will react. Maybe they will lower their prices as well. But for now it’s a big advantage for Nokia.

7. The music.
Apple has a huge advantage in their established iTunes website. However Nokia has a music store of its own. When you buy your Nokia 5800 you will get free music for a year, which of course is very generous. Sure apple has an advantage in this area; they do have their background in mp3 players and iTunes. Although it seems like Nokia is working very hard in this area with their music shop and the increased battery hours while listening to music.

8. General things.
A disadvantage with the iPhone has been that it can’t send MMS. However the Nokia 5800 is able to do this. The Nokia 5800 also has a GPS. I have read that there is some kind of external GPS you can buy for the iPhone but for Nokia it’s included. Although Nokia lacks a few things that the iPhone has, for example it doesn’t support multi touch which many people like about the iPhone.

As a conclusion I find that there are a lot of similarities between to two. At least the Nokia 5800 shouldn’t be worse than the iPhone, but cheaper. If everything that they claim is true, you sure get a lot for your money buying a Nokia 5800.

Thank you once again Neil Bergh from Hightechz.com

134 thoughts on “Is the new Nokia 5800 Xpressmusic better than the iPhone?”