Now this is superb, well for those in USA anyway. This is all about the BlackBerry Storm First-Look, First-Touch Event, they want you to join them for food, beverages and an exclusive, hands-on preview of the most talked about touchscreen smartphone.

This is without doubt marketing at its best, the Verizon marketing team is not content on you just looking at the mobile before release, they want you to look at it and touch it hence the name of the event “First-Look, First-Touch”. 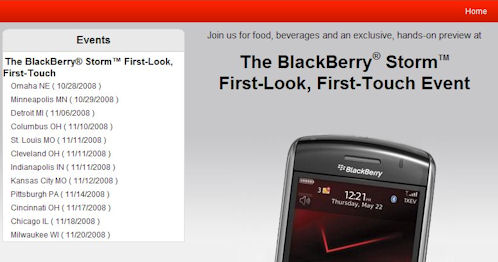 Here are the BlackBerry Storm First-Look, First-Touch events and dates, if you visit the official site below you can click on each of these shown on the list and it will give you greater detail.