Apparently there is a new Apple device on its way which will be announced at WWDC 2010according to an article over on adr-studio, don’t get your hopes up just yet though; the device will be the Apple iWatch and they then go on to say that it’s impossible but they have come up with what it would look like.

Basically what we are looking at here is the iWatch Concept according to the guys over at Gizmodo, the iWatch concept features an aluminium casing and packs 16GB of memory and will sync via Bluetooth or WiDi to your iPhone and iPad.

The iWatch concept could answer calls that come via your iPhone in your pocket and has a built in pico projector to show your videos and pictures and can also display RSS feeds, that is of course if it were real and not just a concept. 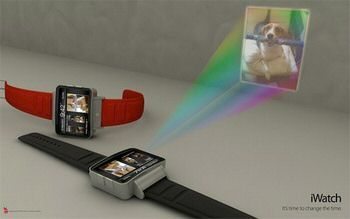 Have to say the iWatch one of the better looking watchphone concepts though, so would you purchase an iPhone for your wrist so to speak if you had the opportunity or would you simply give something like the iWatch a miss?

One thought on “iPhone for the Wrist? Apple iWatch Concept”