Thus far all the Droid commercials coming from Verizon Wireless I’ve seen have been rather entertaining with their futuristic slant, which is hard to reason just why the Big Red would put out such a weird crap commercial for the Motorola Droid X as the one below.

According to Sam Biddle of Gizmodo, this Droid commercial is actually mocking torture victim Abu Ghraib, although it is hard to believe Verizon would do so intentionally.

Biddle says that if you swap out the red robe, and replace with a shredded poncho, and replace the telephone cords with electrical wires you get a replica of the famous image of 6 years ago. 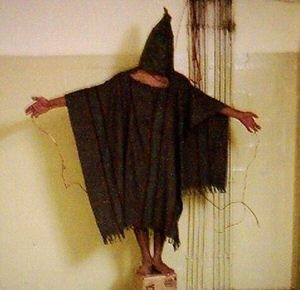 Yes okay if you really want to imagine you can imagine and make up your own mind, but swap out the shredded poncho for a loin cloth and hood for a crown of thorns, and then who do you have?

The video comes courtesy of YouTube user Nxtiak, who basically says it’s the worst Droid X commercial ever, with no mention of any torture victim in sight, so it appears that Biddle has drawn his own conclusions with this one.

So check out the video below and make up your own mind, sure is one dreadful attempt at promoting Droid devices though.