Well as the saying goes, if you can’t beat them, copy them and let’s face it the cloning merchants in China know a thing or two about cloning high profile mobile devices such as smartphone and tablets, and a big priority with Chinese rip-off merchants is of course Apple.

Well according to an article over on 9to5 Mac by Jonny Evans, by way of Shanzai, the cloners over in China have now cloned the Apple iPad and the device is available and apparently can be yours for the price of a trip to China and shelling out some 277 US bucks. 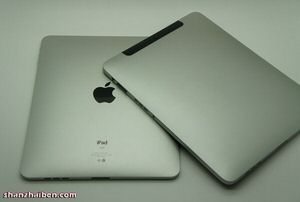 Apparently this knockoff Apple iPad is 9.7 inches and based on Freescale iMX515 hardware and sports 4GB Flash, 512MB DDRII memory and is powered by an ARM Cortex A8 800 Mhz processor, a camera, 3G and WiFi, SIM card slot, 30-pin connector, and 3800mAh battery.

However, I think these Chinese clone artist somehow get confused at what they are cloning as rather than running iOS like the Apple iPad, this knockoff runs the Android 2.2 operating system. So one could say this is an Apple Android iPad…any takers?