This poll was created with the NPolls iOS App between 21 and 23 of January, on a worldwide level focusing on iOS user app behavior. 86% of people who answered to the poll have purchased apps, where 6% of them spent more than 20 USD on apps in the last month. However, it was found to be most common that individuals spent less than 5 USD in the last month (32%).

From the survey, it was concluded that game apps are, by far, the most popular, where 74% of users have bought games. Sports and travel/lifestyle were among the less favored categories (19% and 20% of answers stating they have purchased these apps).

In which categories have you bought apps? 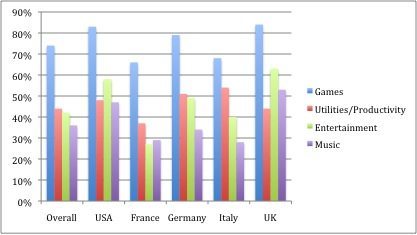 Another interesting conclusion from our survey is that app consumers buy on impulse. 81% do not bother to research before buying software. More than 86% do not care if the app seems useful or not. Most of consumers buy apps after evaluating the description/reviews of the app (36%).

89% recommend apps to their friends and 70% frequently write reviews about purchased or downloaded apps. One thing is for sure, if people don’t like the app they downloaded, they will delete them… after all, only 1% of our users have never downloaded a single app and 53% have delete apps, claiming they were bored of it.

What are the main reason(s) you would delete an app? 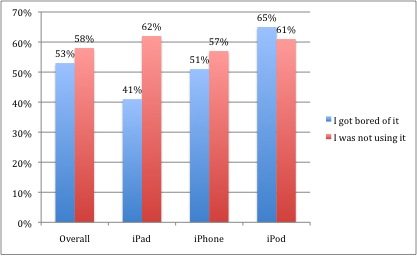 Among the iPod users, deleting apps out of boredom is very common, reaching an impressing 65% of users. While among iPad users, the percentage is 41%. Discarding apps in order to download/buy others is very popular among individuals younger than 25 (62% rid of their app due to boredom) while 34% of the audience older than 40 years declared the same.

NPolls is a professional survey system that runs 100% on IOs devices at worldwide level. Check more info at www.npolls.com or Partner with us for your market at partnerships@npolls.com