More speculation on the much talked about next generation iPad today, with the latest rumour doing the round that the Apple iPad 2 just might feature support for a stylus for gaming, digital painting and handwriting.

According to an article over on T3 by Richard Wordsworth, the guys over at Patently Apple appear to have discovered yet another Apple patent for a stylus friendly touch screen apparently for a new type of stylus. 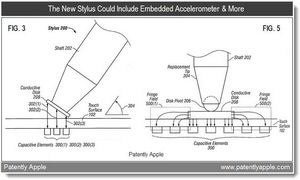 Word is the new Apple stylus would feature a conductive head, which would enable the user to use handwriting on the iPad capacitive touch screen, and would apparently shove the Apple iPad into the graphics tablet arena.

However, one does still have to stipulate that it’s all just rumour that Apple may bring this stylus gizmo feature to the Apple iPad 2, but if not, well I guess there’s always a possibility that the iPhone 5 could support a stylus.