If you are one of the Android faithful out there that would like to access their computer via their smartphone or Android based tablet, there’s a new Android app been released to the Android Market that allows the user to do this called VNC Viewer.

The VNC Viewer application for Android enables the user to see their desktop and run apps along with accessing files just as they would if they were at their computer and furthermore VNC Viewer can connect to any Unix, Linux, Mac OS X or Windows PC. 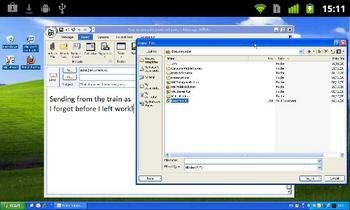 The VNC Viewer app for Android follows on the success of VNC for iPhone and the Apple iPad and features trackpad style mouse control, the ability to apply tap, touch and drag gestures along with pinch and zoom, a scrolling key bar with buttons such as navigation, editing, modifier, function, and even ctlr, alt del keys.

The VNC Viewer app for Android is available for download from the Android Market at a cost of $10, and according to an article over on Pocket Now the VNC Viewer will pay for itself the first time you use it.

We have a little video footage of the VNC Viewer app for Android for your viewing pleasure below courtesy of the RealVNCLtd YouTube page, so hit up that play button and check out VNC Viewer and feel free to let us know if you download the app and how you get on.