If you have been waiting on the Motorola Atrix 4G you will be happy to know the launch is coming earlier than expected with the downside of the Motorola Xoom Tablet being pushed back a little.

The Motorola Atrix 4G has been pushed forward to a new date of Feb. 22 and the Motorola Xoom pre-sales back to Feb. 20th according to Engadget.

Just a little note about the Motorola Xoom, we held a poll yesterday and it seems the Xoom is the most popular tablet that our readers would love to buy, we asked the question “HTC Flyer or Motorola Xoom: What would be your smart choice?” and the results so far show that 76.0%, 128 Votes went towards the Motorola Xoom, HTC Flyer (13.0%, 22 Votes), You know what I would prefer the iPad 2 (8.0%, 13 Votes), The Playbook from BlackBerry for me please (2.0%, 3 Votes) and None of the above thanks (1.0%, 2 Votes). Check out the poll here and have your vote.

AT&T service reps are receiving inbox messages stating that the Atrix 4G smartphone is coming earlier than expected (Around about a week early in fact), and according to Droid-Life a Best Buy memo the Motorola Xoom pre-sales will happen now on February 20th, which is when you can spend your hard earned $800.

Droid-Life also say that you cannot re-activate the data package on the Xoom whenever you like at no cost, there will be an activation charge when you re-activate.

Please do let us know what you think of the news above, do join us on Twitter or Facebook for updates, maybe you would like to hit the Tweet button to let everyone know. 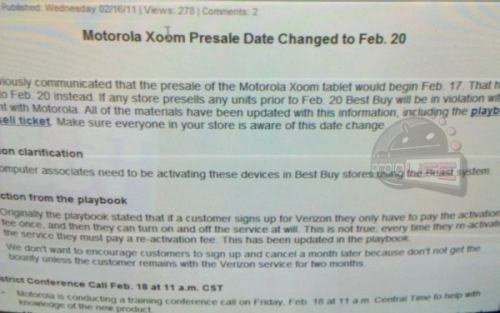