Android 3.0 Honeycomb SDK port to N1 alpha v0.1 has just hit the Google Nexus One smartphone (Unofficial), the Tablet friendly SDK port on this handset will bring many new features.

The new unofficial port is based on the Android 3.0 Honeycomb SDK, which is found on the Motorola Xoom tablet has a few features on its list such as accelerometer, Bluetooth, WiFi, camera and sound according to GeekWord, apparently one of the most important is the alpha rated port does not allow users to receive/make calls as well as send/receive text messages but this can be built on.

The official Honeycomb will hit the market Thursday on the Motorola Xoom and to see the tablet SDK on other devices such as the Nexus One is fantastic news and xda-developers will make sure that the display will work in landscape and the app drawer is functional.

At the moment it is not recommended to have this as your main OS, at the moment WiFi, accelerometer etc as said above are not functional but some XDA Developers have found something very interesting in the way of a quick work around for a permanent landscape display and a fixed app drawer, read on below.

To do the above just start the camera app (Forced Rotation and then go back to the home screen and click on the clock, then simply click again on it on the popup and set lock screen orientation to ON. 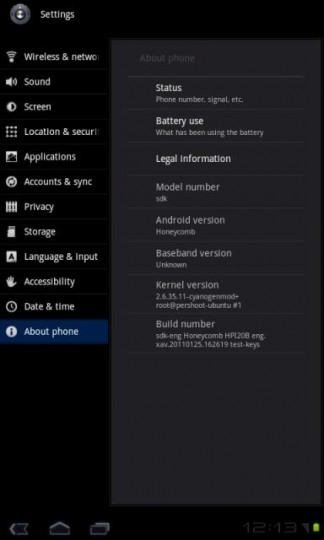 For more information please visit XDA Developers, just want to say thanks to Android Community for partial information and recommend you visiting these sources.