If you want it go get it, yes folks the Apple iPad 2 is apparently available to purchase online as of right now a tad earlier than Apple said, but earlier is better, and all versions of the iOS device can be bought.

According to an article over on Slash Gear, potential Apple iPad 2 customers can grab the WiFi only, the WiFi + 3G, AT&T and Verizon versions in either black or white and has US shipping listed as three to five business days.

Apparently in what is presumed an attempt to avoid rapid stock depletion Apple has limited purchases of the second generation iOS tablet to only two units per customer, so if you want more than two you’ll have to wait a while or try getting another from somewhere else.

So what are you waiting for, you’ve waited long enough for the latest piece of Apple tech to become available so jump to it and go grab the Appl iPad 2 from the Online Apple Store. 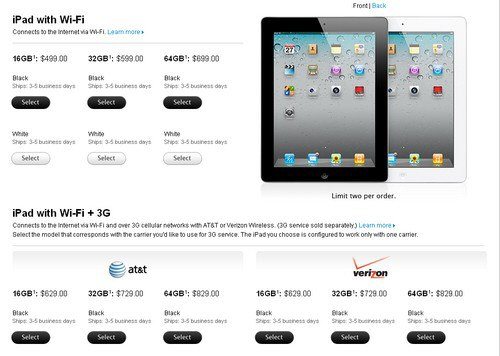