For those iOS users that like to keep an eye on their stocks, MF Software has now released the iStockPicks app for the iPhone and iPod Touch and is one of their first “Freemium Finance titles” for iOS devices.

iStockPicks for ioS devices enables the user to set up lists of their favoured stocks and delivers the ability to run technical analysis of historical stock price movements to generate Buy/Sell/Neutral ratings and when the user receives a recommendation they can tap said recommendation to receive extra analysis and detailed data along with a three month tech chart for that ticker.

The iStockPicks iOS app a single Recommendation Credit for each rating and additions credits can be purchased in-app and when you download the iStockPicks app you will receive 200 credits for free thus eliminating the upfront download costs.

The iStockPicks app works by the usage of a powerful “Recommendation Engine” to deliver historic stock data for a given stock ticker and calculates values such as MACD, Bollinger Bands and RSI indicator and uses those to deliver Buy/Sell/Neutral ratings.

The iStockPicks app for the iPhone and iPod Touch is a free download for ioS devices running iOS 3.1.3 and above and is iOS 4 tested, which can be obtained by hitting up iTunes 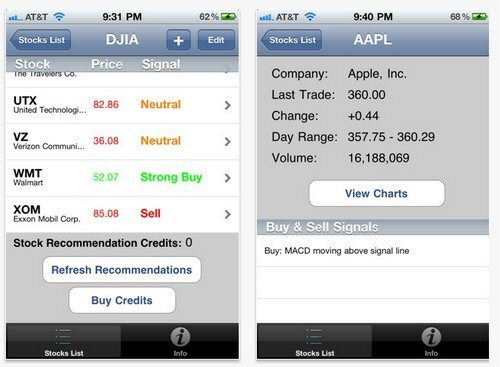