Apparently if you own the HTC Thunderbolt you’ve probably noticed that the option to turn off LTE and just play nice on 3G isn’t available in the settings, which means that the user is somewhat forced to use LTE rather than opting to conserve battery via 3G.

However according to an article over on Engagdet Mobile, the HTC Thunderbolt 4G LTE on/off option have now been found via a hidden test menu, and the guys over at Android Central Forms have come up with a guide for locating that toggle switch.

So here’s how its done…access the dialler and put in # * #4636# *, next select “phone information,” then go down to “set preferred network type,” and then select “EVDO only” or “CDMA only” hit “CDMA auto” and this should disable LTE.

Apparently to turn LTE back on you follow the same steps to “set preferred network type,” then select “LTE mode,” open menu again and hit “CDMA+LTE/EVDO auto,” and the job is done.

Apparently doing the above will enable HTC Thunderbolt users to conserve battery life 4-fold and gain up to eight hours on a full charge with regular usage when not using a battery efficiency app.

So there you have it, give it a go and feel free to let us know how you get on and whether you experience better battery life from your HTC Thunderbolt by posting to our comments area. 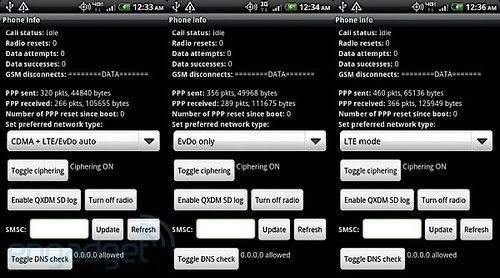 14 thoughts on “HTC Thunderbolt LTE Off Switch Located and Guide”