Now that Apple doesn’t really have anything new to offer the eager mobile space, all Apple rumours tend to fall at the door of the next iOS smartphone, the one that has become known as the iPhone 5, and today more speculation hits the net waves.

According to an article over on Redmond Pie and by way of 9to5 Mac, the speculation now is that the iPhone 5 will come out to play packing a 4-inch touch screen and is expected to release before the 30th of June.

Apparently this latest iPhone 5 rumour comes via Italian site Mela.Blog, who have apparently notices a hand-made case listed on the Apple online store, and apparently comment that the design hints at a larger future iPhone, so presumably the iPhone 5.

Personally I don’t see any difference that would warrant saying the case was for anything other than the iPhone 4, iPhone 3GS or iPhone 3G like the store indicates, but check out the picture below to see what you think.

As for that speculation that the iPhone 5 will arrive before the 30th of June, well this is placing quite a bit of credence on a book listing for a book called “iPhone 5 Made Simple” on Amazon that has a release date of the same time, but really doesn’t mean Apple will let iOS users get the device on or even before that date does it.

Still make of it what you will, but to accept these as further proof that the iPhone 5 will be bigger and release before the end of June maybe pushing speculation a bit too far. Is anyone becoming tired of all this speculation over the iPhone 5? 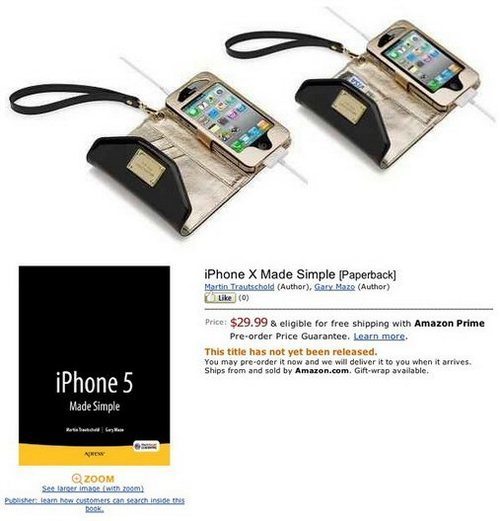 2 thoughts on “iPhone 5: The Speculation Continues, Albeit Very Thin”