Looks like Motorola Atirx 4G user are in line for their first software update for the device at some point in the not too distant future as Motorola has now confirmed there are working on software for the Android 2.2 Froyo smartphone.

However Motorola is on the lookout for 1000 testers to obviously test out the software update before such time as Motorola release it for public consumption, and anyone wishing to become a tester can do so by registering here, and then completing the form up until 11am Central Time today.

The guys over at Phone Dog have also updated their post to say that a Motorola forums manager has stated that the Motorola Atrix 4G software update WONT include a fix for the voice quality problems the device is currently experiencing.

So looks like Atrix users are still stuck with that voice quality problem for now, so I wonder what will come with this new software update…any ideas? 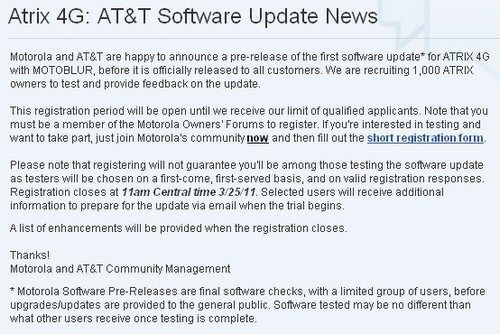