For Nokia smartphone fans, Nokia is still pushing out Symbian^3 handsets before the big push with Windows Phone 7 and one such handset that has been leaked on numerous occasions is the Nokia E6-00, and now the device has posed for pictures and video footage.

The Nokia E6-00 pictures and video come our way courtesy of the guys over at the Boy Genius Report and by way of My Nokia Blog and NokiaTeco forums member Quick99 with the video footage lasting just two minutes.

Spec wise the rumour is that the Nokia E6-00 sports a VGA touch screen along with a new version of Symbian^3 with a 4:3 display aspect ratio adaptation, and 8 megapixel camera with dual LED flash and 720p video and a front facing camera and full QWERTY keyboard.

There’s no word on just when the Nokia E6-00 is likely to come out to play or at what price, so until then you can skip on down, mash that play button and check out the rather blurred footage of the device…enjoy. 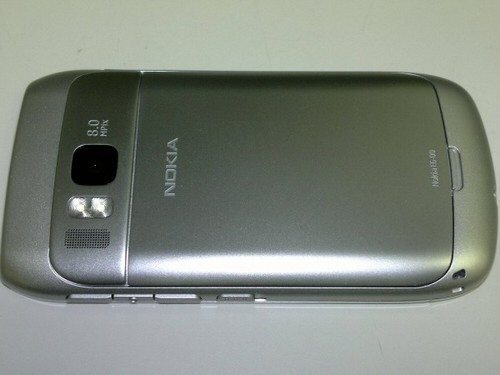