According to Florin over at Unwired View and by way of PC World, Rovio has now confirmed via their official Twitter account that Angry Birds Rio has exceeded the 10 million downloads mark just 10 days after being released.

That over 10 million download of Angry Birds Rio includes both free and paid versions of the popular mobile game on both the iOS platform and the Android platform, and is of course a tie-in to the movie Rio.

Angry Birds Rio differs slightly from Angry Birds as this time round the game features character from the soon to be released Rio movie and not a green pig in sight. The game will also receive a minimum of four updates this year, which have apparently been scheduled for May through November.

Have to say I’ve played Angry Birds Rio and the new game is just as addictive and any other Angry Birds version albeit the absence of them pesky pigs. 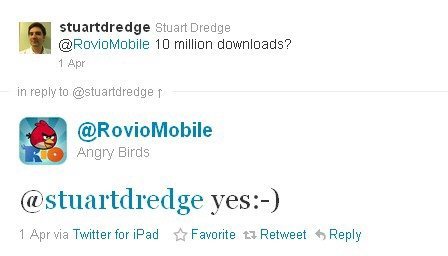